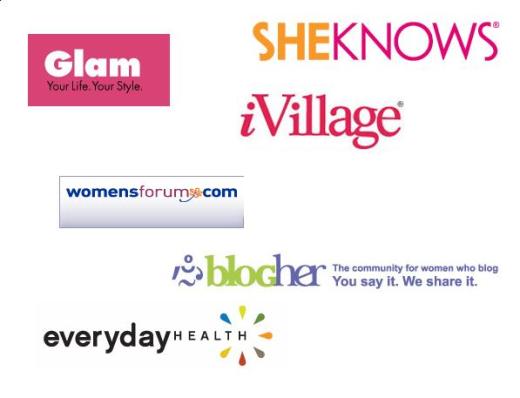 As we know, ad network is a big word that covers multiple realities. You’ll find horizontal ad networks (scale and reach across multiple content sites with no discrimination on the content type), vertical ad networks (that represent sites mostly on the same vertical or segment), behavioral ad networks (buying data from publishers enabling them to then reach a particular audience when the user is not any more on the origination site) etc.

These networks can sell premium inventory, remnant, data, video inventory or push out market exchanges that help publishers to connect with advertisers etc.

The vertical ad networks focused on women really started to take off in late 2005 and 2006 reached a peak early with very high transaction price and multiples (a good example is the $85m round raised by Glam early 2008 as a public valuation north of $450m – see the TechCrunch post there).

Still looking at our ComScore December figures (they’re here), we can identify a lot of them highly ranked. Some of them are part of other networks. For all of them, the game is to add properties and have them sign traffic assignment letters for ComScore and Nielsen, enabling the network to show bigger and aggregated traffic figures.

Here are the main ones:

The CPMs are dropping: Obviously the biggest challenge for all these networks is the proclaimed dip of CPMs on display advertising. The success of a vertical network is to justify the cut of 50% by the ability to reach larger ad buys (because of the scale) while not having too low CPMs (because of the proclaimed vertical and niche reach of women “24 to 49”). But the model was completly perversed by Glam when they aggregated very low quality sites and small blogs. Also, the decrease in CPMs is already having a big impact on all the ecosystem: most of the networks are now focusing back on the key sites on the network and don’t give anymore guarantee to publishers).

The value of ad networks is blurred: Because of the Glam / iVillage competition that drove both of them to aggregate as much as they can, despite the quality of the site or the relevance of the network, advertisers are more and more reluctant in buying a network inventory unless prices are slashed (but in this case, we’re getting close to the horizontal networks and the whole rationale of building a vertical network, based on the ability to command higher CPMs, is crushed).

ComScore and Nielsen: I’m very convinced that most of these aggregation strategies were in large part driven by the ComScore and Nielsen games (i.e. how to appear the biggest women network on ComScore to the attention of the 21 years old agency planners…). ComScore already announced to its members that it intended to break down the Women vertical into a lot of different subverticals (health, food, fashion and beauty etc.). That also might change the networks strategies when they realised that once sliced and diced, they’re not this impressive…

Stay tuned for the Part 3 on The Women Content Sites