This is a repost from the Placemeter Blog. 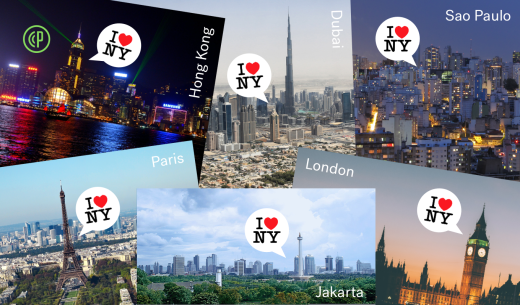 I’ve been doing a bit of traveling over the past two years, as we realize our vision of creating a more intelligent and data-driven city. From Jakarta to Dubai, Sao Paulo to Mexico City, Hong Kong to London, or Barcelona to Singapore, some of these large cities, while enormously removed from each other, share a lot of common traits.

The metaphor of the city as a living organism began a long time ago — Plato’s Republic draws an analogy between city-states and individuals. But more recently, researchers have started using the laws of biology to try to understand how a city grows.

Humans get roughly 1 billion heartbeats. A bigger organism, like an elephant, gets less. It must consume more energy, so its heartbeat is slower, and its life expectancy scales upwards in the same linear manner. Similarly, a large city will consume drastically less energy per capita than a small village.

This uniformity of scaling does not necessarily mean that cities grow the same way. You can almost think about them as layer cakes, with generations of people, designs, and architecture, and a patchwork of emotional and rational decisions. And that’s what ultimately gives them their charm — strolling around Little India in Singapore is a completely different experience than walking through Roma in Mexico City.

But more recently, a few trends have been pushing people all around the world to want their cities to have and embody the same exact things. There are a two factors driving this uniformization:

The impact on cities and their populations is drastic: you can have the same exact experience, no matter where you are.

While the Cidade Jardim Mall’s website is beautiful and leads you to believe in a new way to shop, my experience was more like this and was so similar to the experience I had in this mall in Hong Kong.

This can’t be ascribed to laziness. Each brand and each mall has figured out the storefront designs and brand experiences that will get more shoppers into their stores. So while small tweaks in retail strategies may be made from region to region, the ultimate effect is one of homogenization.

And sure, a mall is a mall, but we see the same effect with many small businesses. Several New York City boutiques run successful Instagram shops, allowing them to sell to audiences far beyond their geographic location. This pushes small businesses in their customers’ locations to model their feeds and their stores after those in New York, again introducing a “sameness”.

This trend doesn’t stop at the retail experience. Look at how Parisians are in love with a glorified image of Brooklyn. As a Frenchman who’s lived in New York for the last 10 years, nothing pains me more than going back to the city I grew up in to find it hawking bagel cafes and burger joints (this is a fun slideshow of such cafes). That’s not to mention fashions and hairstyles.

Worse: Beirut, which at over 5,000 years old is one of the oldest cities in the world, had its city center completely redesigned under the late Rafic Hariri. The result is a Disneyland version of an Arabian town, with the city’s identity forever changed.

The media’s glorification of Brooklyn is influencing businesses in Paris, and its promotion of “starchitecture” is influencing leaders and planners in Beirut. But in the end, it comes down to idealism. It’s a belief that ideas and systems from other people and places are more successful than one’s own, and that adopting them will make one’s self and one’s society better.

I’m not saying cities should be frozen in time. One of the boring things about Paris is that the architecture is monotonous. It can feel as though France’s Monuments Historiques and their enforcers are fossilizing Paris.

That being said, reinvention should not mean cloning the same experiences all around the world. In contrast, New York’s Landmarks Preservation Commission, though strict in its requirements, allows for reinterpretation of historic forms, allowing for constant, if measured, reinvention.

So let’s stop trying to make everywhere the “New Brooklyn”! Instead, let’s advocate for delicate change, with a conscience of the past and of tradition, with a respect for the variety of people and ideologies involved and, with a sense of one’s roots and origins.